Some disappearances of people are so incredibly odd and unexplained, that you’re fascinated by every aspect of the case. I stumbled onto a case of a man who disappeared and then was found dead in a river. But it’s not that he disappeared once; he disappeared  and reappeared 3 times that night. And I believe he was dead every time he appeared. Intrigued?

Then let’s look at the case of attorney Thomas P. Meehan. 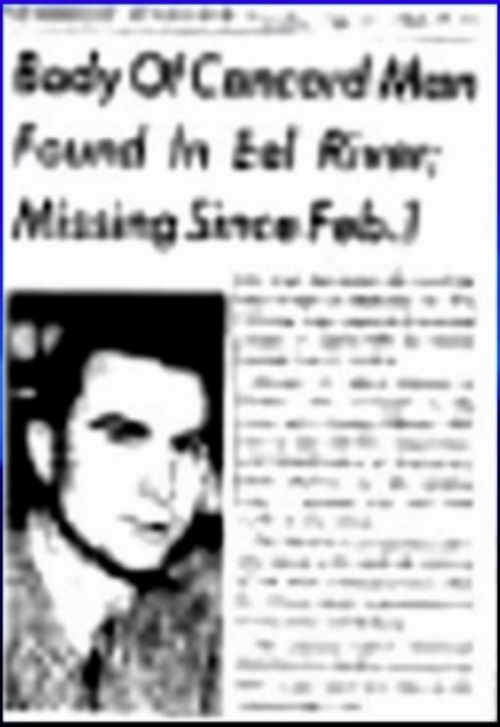 Only pic I could find from YouTube video The Strange Case of Thomas P. Meehan

It’s not clear whether the case of Thomas Meehan should be called a disappearance. The man was seen by witnesses at the very moment that he disappeared. And he did turn up in the end—or at least his body did. Yet, something very strange happened to Thomas Meehan on the night of February 1, 1963. And he did disappear that night—not once, but several times.

Meehan lived in Concord, California, a suburb of San Francisco. He was a lawyer. One winter, business took him to northern California. On the afternoon of February 1, 1963, 38 year old Thomas P. Meehan completed arbitrating a case for the State Department in Eureka California and at two o’clock began the drive to his home in Concord.

On the way home, Meehan called his wife from a pay phone. He told her he felt sick. He was near Garberville at the time, still a six-hour drive from Concord. His wife told him not to push himself. “Check into a motel,” she said. “Get some rest. Drive home tomorrow.”

That was at 5:00 P.M. Around 6:30, Mr. Meehan showed up at a county hospital in Garberville. The emergency room was crowded, and Meehan was told to wait. Witnesses remembered him sitting in the waiting room, because they noticed his dark eyes and haunted look. At 6:50, a nurse called Thomas Meehan up to the desk. She began asking him questions and filling out a paper for the doctor. As she wrote her notes, Meehan kept asking her a question. “Do I look dead to you?” he asked. “I feel like I’ve died.” Finally the nurse finished the paperwork. She filed it and came back to tell Meehan the doctor would see him now. But Meehan was gone.

This was not necessarily strange. Meehan could have changed his mind about seeing a doctor. He could have slipped away without anyone’s noticing him. The nurses were busy. The patients had their own troubles. But, now comes a strange twist in the tale of Thomas Meehan. At 7:00, two people saw an accident many miles south of the hospital. A car skidded off Highway 101 and plunged into the Eel River. This couple called the Highway Patrol to report the accident. The car they saw belonged to Thomas Meehan. So, just when the lawyer was talking to a nurse in Garberville, his car was plunging into an icy river far away. Who was driving that car?

That’s not all. At 8:00, Thomas Meehan arrived at the Forty Winks Motel. This was miles north of the hospital and the accident site. Meehan started a conversation with the motel owner. The two men talked for an hour. Meehan looked pretty normal to the motel owner. He was not covered with blood. He did not look sick or injured. But his shoes and his cuffs were wet. And, from to time he kept asking an odd question. “Do I look dead to you? I feel like I’ve died,” he said. “Do I look dead?”

At 9:00, Meehan finally went to his room. Half an hour later, a motel worker knocked on his door to give him something. Meehan was in the room. He had changed into a white shirt and a black suit. That was the last time anyone saw Meehan alive.

Meanwhile, back at the river, the police had arrived. They found Meehan’s car nose down in the river. Skid marks showed that it had left the road at a high speed. The windows were open. There was water inside and blood on the roof. The police found footprints on the muddy banks. But the footprints ended suddenly about 30 feet from the water. There were drops of blood beside the footprints. These ended, too. It was hard to see why the footprints ended. If the person had kept walking, he would have made more footprints. It looked as if someone had walked 30 feet uphill—and disappeared.

Thomas Meehan’s body was found 19 days later. It had washed ashore downstream from the car accident. It had a head wound. The dead man’s lungs were full of water. This fact showed that he had drowned. The police said Meehan had been thrown from the car as it crashed into the river. He had banged his head as he was thrown out. He had landed in the water unconscious. That’s why he had drowned.

But if that is true, how did he make those footprints? Why did the footprints end? How did he pop up in the county hospital at 6:30? How did he check into a motel later that night? These are the questions that puzzled many people at the time. They are just as puzzling today.

Thomas Meehan was killed when he was thrown from his car and banged his head. At 7:00 pm his car was witnessed to have plunged into the river. But, at 6:50 pm, Thomas was in the hospital. He had to fill out paperwork. That probably took more than 10 minutes. Then he disappeared. How does that work? How can you be dead in the river and still be at a hospital???

I believe the witnesses to the accident were off about the time the car went into the river. I think Thomas was dead when he showed up to the hospital at 6:30. No, he wasn’t a walking dead body.

He was a fully formed apparition which is so rare and incredible, but not impossible. This is not the only case of someone seeing a solid version of others after they’ve died.

Here is a YouTube video on Thomas: The Strange Case of Thomas P. Meehan