In the Cryptozoology world, there is every kind of beast that the human mind can conceive of. Underwater monsters, goat-sucking creatures; things being spotted in the woods that just aren’t a part of normal animal development. Could these beings be Chimeras?? Something that has skipped the evolutionary chain? 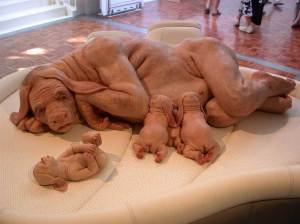 Concept of a “parahuman” by Patricia Piccinini

Chimeras are a part of mythology; creatures that were part goat, lion and serpent. But now there is talk of using stem cell research for something a little more sinister than helping the medical community cure different cancers and diseases. Genetic manipulation? Human frankenstein-type creations similar to the awful, twisted Nazi experiments that happened during the Second World war?

Scientific American published an article on human-animal chimeras. The article states that Canada has banned chimera experiments, but the US has no such restrictions. When you think of the hundreds of private research labs, no one knows what some of them could be creating:

“There are currently no international standard governing chimera experiments. Canada’s Assisted Human Reproduction Act of 2004 banned human-animal chimeras. The US has no formal restrictions, but Senator Sam Brownback of Kansas proposed legislation in March that would outlaw several kinds of chimeras, including ones with substantial human brain tissue. Some institutions that supply human stem cells set their own additional limits about what experiments are permissible.

Within the US, at least, greater uniformity may emerge from general guidelines on stem cell use recommended in late April by the National Academy of Sciences. The NAS recommended that chimeras involving most animal species generally be permitted. It urged a ban on any use of human cells in other primates, however, as well as the introduction of animal cells into human blastocysts.It also warned against allowing human-animal chimeras to breed: some human cells might have managed to infiltrate the animals’ testes and ovaries. Breeding those animals could theoretically lead to the horrible (and in most cases, assuredly fatal) result of a human embryo growing inside an animal mother.”
From Human-Animal Chimeras
Jun 27, 2005 |By John Rennie

Maybe, some of these blended, mutated animal-human hybrids are what people have been seeing over the years in parks, forests, highways and mountains. Would these creatures have been let loose as part of an experiment, or escapees from a laboratory?

What do YOU think??