This red brick 5-story building was a fixture in Edmonton for a century until it succumbed to a crippling fire and eventually, demolition. 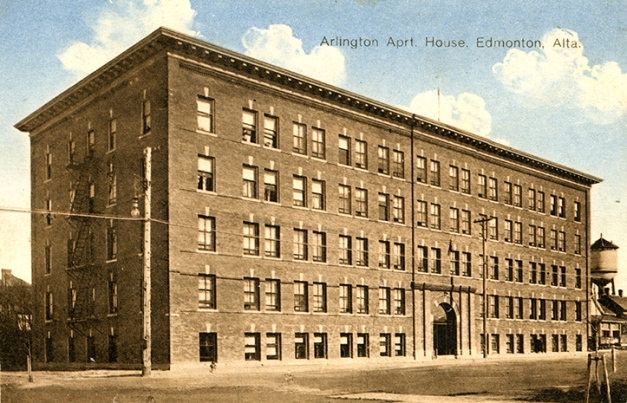 Built just before WWI in 1909, the Arlington purportedly housed Edmonton’s first serial killer James “Bluebeard” P. Watson, who lived in the Arlington from 1914 to 1918. He admitted to killing nine of his 20 victims during the same period. He resided in Suite 14.

Watson ran a collection agency in Edmonton from 1914 to 1918. His love letters were found in a storage locker at the Arlington and were used as evidence in his trial in California where he was ultimately incarcerated.

In the 80’s, a group of practicing black magic witches allegedly lived in the building and were evicted from their apartments. A building supervisor was downstairs in the boiler room after the group left and apparently found little hex dolls of everyone in the building, with something personal from each of the tenants bound to the dolls. It was reportedly in a hidden panel in the wall. You wonder what they were so pissed off about or maybe they just had no sense of humor with their neighbors.

Ghosts of an elderly couple were spotted entering the elevator that sometimes didn’t work. They would enter the elevator and it wouldn’t go anywhere. When the doors were opened, no one was present inside. No one knew if they were previous residents or just a couple of fun elevator-riding ghosts.

The Arlington Apartments suffered a suspicious fire on April 5th, 2005 and eventually in 2008 it was torn down when it was deemed unsaveable.

Since it was a historical building, it was very sad to see it go. I never had the chance to enter it, but I did take photos at night, and had some unusual phenomena. It felt as though there was a couple of beings watching through the windows. The hoofed beastie thing in the picture is just one of those odd spirits that could be there because of the negative witchcraft in the apartments.

It’s too bad I can’t find more information about Mr. Watson and his nasty activities. That’s a piece of history there should be more about.

I would have loved to be able to have conducted a paranormal investigation in the Arlington. I have no doubt we would have come up with some amazing stuff.

Manifestation at Deadmonton House and End of Season Party

Saturday, November 14th, 2015, we were invited to the Wrap-Up party for the DEADMONTON HOUSE; an incredible Halloween haunt that takes place in the old Edmonton (Alberta) abandoned Paramount theatre.
Ryan Kozar, a firefighter in Edmonton is the creator and “ghastly” puppet master behind the scenes. It will be even scarier in 2016! Because we provided one of the hearses that sometimes parked outside the haunt to advertise it, we were lucky to be included.

We saw familiar faces who are good friends of ours and met new people who are just as crazy as we are about Halloween. Ben and I had done an investigation earlier in the year – August, in the theatre and got some photos and some good video. Our friend Jessica followed us with a video camera. (we will have footage and photos posted in the new year) We could not put up some of the photos/footage because of the fact that Ryan needed confidentiality in what and how he was setting the haunt up.

Anyway, I digress; as we were partying, I asked my good friend Rebecca YEGFoodie Reid, one of the BEST food critics/Yelper in Edmonton, to take me on a tour of the darkened theatre/projection room/basement areas. Reason being, that when a building becomes used for re-enactments or haunted amusements, the energies change. It brings out spirits who are attracted to the specific theme, i.e., people in period costumes re-enacting historical events; or in this case – horrifying makeup, silicone masks and scary costumes running around frightening people (and having fun while doing it).

Picture at the Wrap-up Party at Deadmonton House. You can see the formation off to the left.

Enlargement -Turquoise theatre light hitting some kind of Ectoplasm formation behind the young man’s head.What do YOU think it is??

So, guess what I found walking around the building with Rebecca??? 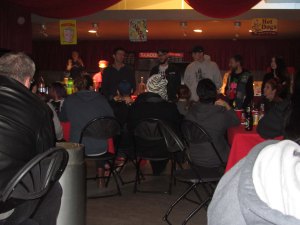 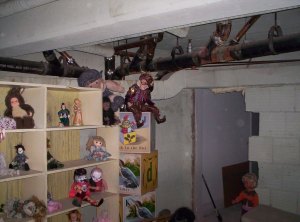 The poor resident spirit of the theatre, Frankie, is a very submissive spirit and was hiding most of the time. As the official spirit custodian of the theatre, this is something he can’t really clean up. The odd thing with the majority of these new spirits that had infiltrated the theatre, was the vagueness of who they are and what they are. Usually I can see exactly who they are. Not here. But the energy level was so thick with bad and horrific feelings that you felt like there were eyes everywhere and something was trying to get behind you.

I know YOU’RE going to say: “But it’s a haunted amusement with creepy staged scenes everywhere; of course it’s going to feel like things are watching and trying to get you.”

I’m going to say: “Yeah, I know! I’m seeing with my medium abilities, not the conventional way of seeing.”

We are hoping to do a follow-up investigation because of all the new spirit activity and to make sure they leave, but Frankie he custodian spirit, stays. Stay tuned to the blog to find out what happens next!!!!