Guardians of the Dead

Crows and Ravens are always in the cemetery.
They have a job that is not of our physical world.
They are sentinels, guardians of the spirits.

This little guy was frozen on a headstone in an Edmonton, Alberta cemetery. I got so close to him, I could feel his feathers on my face. Then I started to take photos of him (I did ask his permission) but the close up ones didn’t come out too well. He would NOT leave that headstone. It’s like he was waiting for someone special.

The Welsh thought that Ravens were portents of death while the Indigenous Native Americans saw Ravens as a Trickster and The Stealer of Souls. The ancient Greeks and the Norsemen had them in their religion and also used them for divination purposes.

When we go to the cemeteries in different parts of North America, the UK and Europe, I always see crows and ravens. And always in odd numbers. They are highly intelligent and remember if you have done something negative or positive in their presence or to other crows and ravens. They have always been very nice to me and I love seeing them. 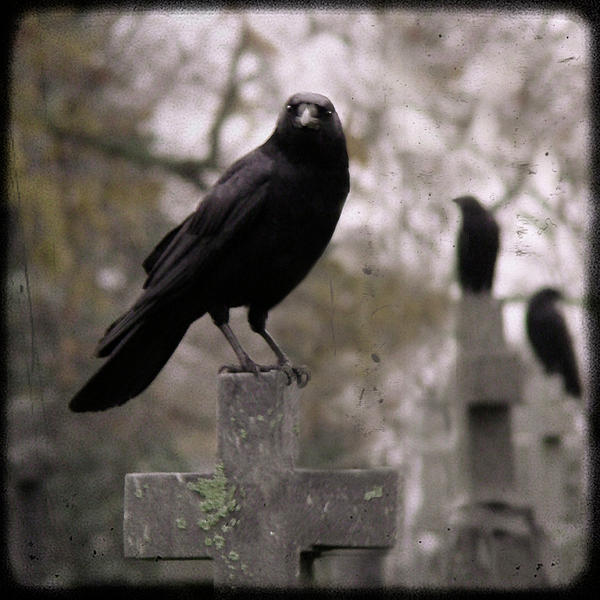 Some info and video on Corvids:  http://www.pbs.org/wnet/nature/a-murder-of-crows-crow-facts/5965/