Beginnings of our overnight vigil 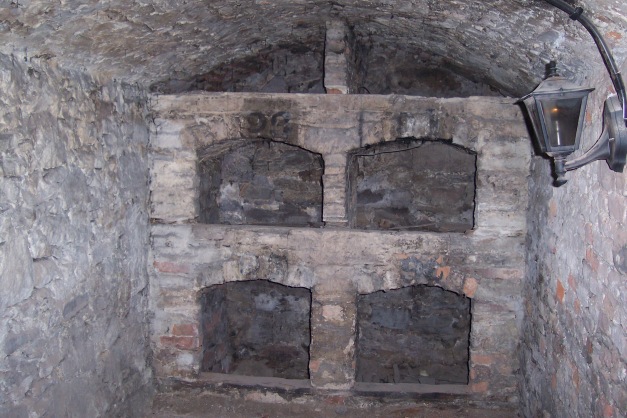 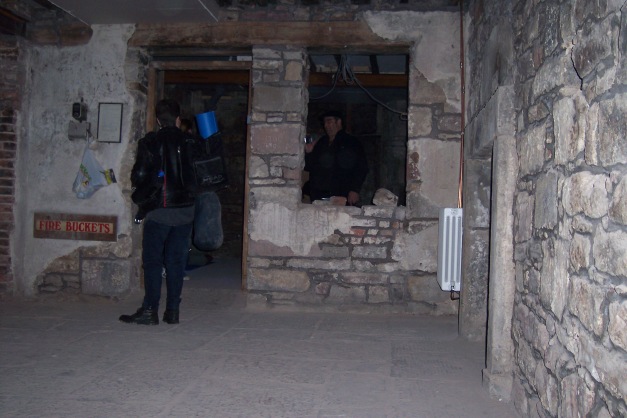 The room where women were given abortions

Our disembodied hand of “Mr. Boots”

John, who got kicked by Mr. Boots when he was laying down 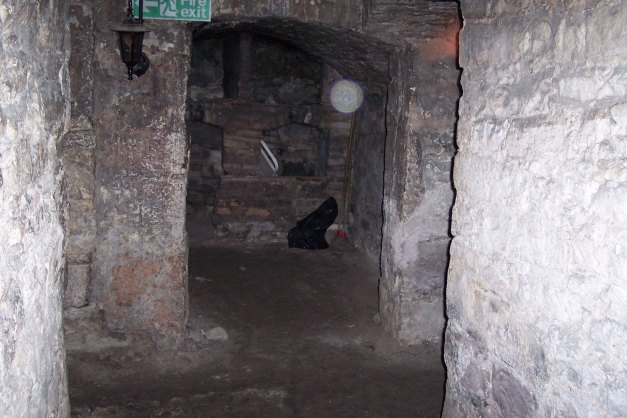 Group of people trying to communicate with makeshift ouija board

We went on the overnight Vaults Vigil held in the Blair Street Vaults in Edinburgh. As part of the first year of the Mary King’s Ghost Fest, we were privileged to have seen both the Blair Street Vaults and the Niddry Vault. The event was run by Mercat Tours and the two guides who helped facilitate our stay were Gary and Emma. They were very helpful, friendly and well-learned about the historical facts.

You can read some of the history of the vaults by going to the site www.mercattours.com.

First we walked through the Cowgate Close to see the Niddry Vault. I was busy taking pictures in the vault when I had a sharp blinding pain on the right side of my head and then an impression of a man who was bludgeoned to death in that particular area. I knew there was some energy around so I took lots of pictures and did capture an orb present with us in the vault. From there, Gary took us walking over to a non-descript building (meanwhile my head thankfully cleared up once we were outside) and entered into the most haunted Blair Street Vaults!

We were split into groups of six and really liked the group we were in. Three people in the group didn’t have equipment but they had eyes and ears and senses so they let us know when they heard or felt something. John and Mel, the friendly husband and wife couple from Edinburgh, were equipment-less but had a lot of things happening to them. In one room Mel kept having one of her arms go cold and numb on her. They could also smell different things like pipe smoke and a floral smell. I unfortunately can’t remember the other two ladies names in our group, but they were very patient and fast-learning ghost hunters. The one girl from Australia with a camera was getting some amazing orbs in her pictures.

All of the groups were able to explore each room in the vault and then we got to pick which one we wanted to do a vigil in. Some people in other groups were getting fantastic manifestation pictures. We were getting a little frustrated and jealous (just kidding). However, when you have a digital camera, you can’t always see everything that your camera has caught. So you have to learn patience as a ghost hunter and know that you will get something if you are open to it.

In one of the rooms I had an instant impression of a shirtless man in his early to mid-twenties dressed only in dark long pants. He had shoulder length sweaty hair and his face reminded me of the actor Robert Carlyle. He was very wiry and was a bare-knuckle fighter back in the early 1700’s. These were not ordinary boxing matches, they always fought to the death. This spirit was a very successful boxer, so all the gamblers coming to the vaults would bet on him. John, who laid down on his mat in this room, managed to get his forehead slapped by some entity.

I could not get any other clear impressions of people who had once lived down there as there were too many people in the vaults. The strange thing that happened to our group every time we moved to a different room in the vaults is the temperature would drop after the first 5-8 minutes we were in there. And it wasn’t our imagination, we took temperature readings every time, and the drops were sometimes up to a 10 degree difference. In one room, we started to see our breath after being in there for more than 10 minutes.

We were happy with the outcome of our vigil in the vaults after seeing the video footage and our pictures. Thanks to Mercat Tours, Gary and Emma, The Edinburgh Ghost Fest, and our four partners with us in the vault.

To find out more about the Edinburgh Ghost Fest, go here: edinburghghostfest.co.uk.

To find out more about the history behind the Edinburgh Vaults, check out this site: www.realmarykingsclose.com

In addition, Bite Me Magazine had an article on us in one of their issues.

Public not allowed in this crypt

Our tour guide for the Greyfriar Cemetery 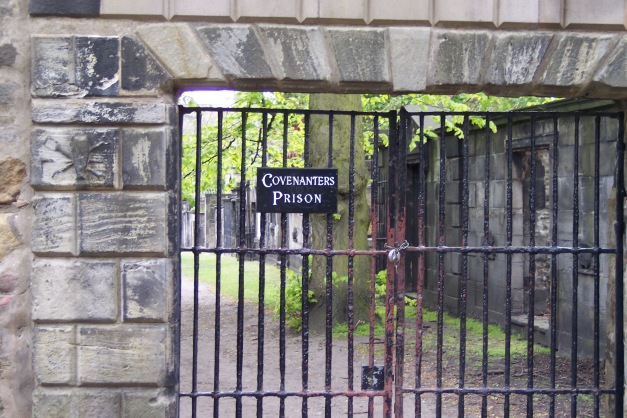 Coming into one of the vaults – orb!

The night before, we went on the Mercat Ghost Hunter Tour. It leaves the Royal Mile (you meet at the Mercat Cross) and winds through the sinister, dark ‘closes’ of Edinburgh’s historic Old Town and into Greyfriar’s Graveyard. It then enters the permanently locked Covenanters Prison which contains the Black Mausoleum – site of the famous MacKenzie Poltergeist. We had a fun tour guide and never got to experience the poltergeist but had plenty of energy in the tomb. We captured a few pictures of orbs in the mausoleum. Unfortunately our tour started at 8:30 so it wasn’t very dark at the time. But we managed to have some darkness near the end that made conditions favourable.

One comment on “The Edinburgh Ghost Fest – A Bloody Good Time!”