Sometimes, We Get Spirits At Our House, Too!

Because we deal with so many other people’s paranormal problems, we have a protective boundary when it comes to our own house. Spirits who are NOT related to us, are spiritually blocked from entering and bothering us. Family and friends who have passed, are allowed to come and see us.

However, we have had those who have squeaked in through some “hole” in the fabric and have come in and created havoc with us. One instance, a spirit kept imitating Ben’s voice and my voice calling each other down the hallway and instigated us yelling at each other: “What in the hell do you want? Quit calling me!”

Recently, I had 2 separate instances of ghosts showing up at the house; one wanted help, the other wanted to “harm” me.

I felt someone was at our front door. Had left the inside main wood door open and screen door closed. I was in living room and then went to the top of the stairs and looked out the screen door and detected the spirit of a little girl who was approximately 3-4 years old.

She had shoulder length medium blonde/dirty blonde hair with a pale color headband. She had straight hair with bangs and was wearing a white top, pale color skirt, white stockings and pale color canvas running shoes. 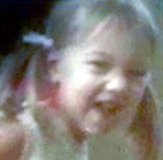 She didn’t speak but my spirit guide conveyed to me that she had gone missing in the early seventies (maybe 1969-1971) and had never been found. She had been murdered.

I asked for the portal to open and a higher being who looked like a story book angel with wings (which I have never seen before – most of the higher ones have no wings at all) came out and knelt down to the little girl and folded her wings around her, picked her up and carried her into the light. For some reason, a parent was not allowed to come out to get her. It was conveyed to me that this parent was still alive; was responsible for her death, and so could not bring her into the light.

I spent many, many hours trying to find out who the little girl could be and I finally found a girl matching the details, with the name Michelle Kelly Pulsifer on The Charley Project website. I can’t say 100% for sure it’s her, but I can’t believe how everything lines up with being her.

The more I look up info about her, the more I believe it’s her. There are a series of 3 videos on YouTube about her and her disappearance. Her mother was heavily involved in Michelle going missing.

Three days later….. I was sitting in the chair watching TV and I had the distinct feeling that a male spirit was slowly creeping down the hallway with the intention of strangling me. I could feel this tingling in my neck and back and was overwhelmed with protecting my neck.

Not Actual photo of the spirit. AFP/Getty Images

He was a young man in his early twenties; his face was not so clear to me but I could feel the anger and hatred coming from him. Had to immediately shut his energy down and have him pulled into the light. Didn’t see who pulled him in, they came right from the portal.

As Paranormal Investigators, We Need To Have Solutions For Our Frightened Clients

There are many paranormal groups out there in North America and in different parts of the world. Some people are part of an investigative team because they want to experience the paranormal and prove its existence. Others want to debunk the paranormal (I don’t get that one – if you don’t believe in it, don’t get involved in it).

Yes, NOTHING HAPPENS, NADA, no ghosts coming up on the EMF meters or camera equipment. Does that mean there is no paranormal activity existing in these people’s home? No. It just means the equipment isn’t picking anything up because the spirit(s) aren’t there at the time or, they don’t want to be picked up on the equipment. Dead people can be buggers and can decide they aren’t playing your game. So do you tell these poor, scared homeowners that they are imagining it and there’s nothing there? Do you?

Let’s say for a moment that you do find spirits……what do you do then? You catalogue the evidence, tell the homeowner: “Yup, you have ghosts here. We’re all going home now. Good luck with the scary stuff in your house.”

So then the homeowner gets in a priest or someone from the religious community and pays them an exorbitant amount of money to exorcise the spirit out from their home. Well, the spirits don’t really like frankincense being flung around or the sage burning. They think it stinks and they temporarily leave only to come back again days later. Yes, they do. Just an F.Y.I.

Many times Ben and I are called because someone had a paranormal group in their house who spent hours doing an investigation (based on the reality shows they watch) with either no results, or, requests to come back again to do a “further” investigation to see if they could find something to record on video or camera.  That event ends up creating more angst and paranormal activity. The homeowner is still scared and stressed now. Lots of stuff for the spirits to feed off of and become more active. Nothing is resolved for anyone.

Whether you agree with me or not, paranormal groups who do investigations have an obligation to have a solution to a homeowner going through a disturbing paranormal event. So next time you are going to do an investigation, be serious and compassionate and realize this family has to stay in this house and put up with what is happening there while you are able to leave and go have a good night’s sleep with nothing lurking or peering at you over your bed.

Let’s be compassionate to the people who call us to investigate the place they live in. When you put up on your website or Facebook page that you investigate the paranormal and you advertise that you will solve people’s problems, be 100% sure you can do what you promise.