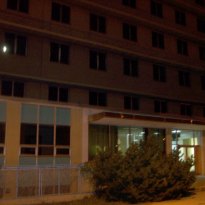 Don’t know if this is light play or something ghostly

Getting ready to go in 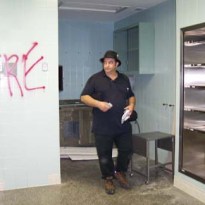 Ben in one of the operating rooms

Hallways were in good condition 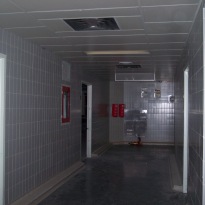 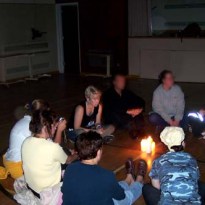 The Paranormal Explorers went into the Charles Camsell Hospital in the summer of 2005. Before a certain architect bought it and started gutting it, and before floors started falling and broken glass and barbed wire were scattered everywhere. There was a LOT of paranormal activity in that building, everything from elevators without power going on their own; hearing footsteps above us when there was a 3 ft. concrete ceiling separating the floors; unearthly scream on the Psych ward floor; walkie-talkies saying strange things and the list goes on.

Everyone involved in the investigation either fell sick or had incredible nightmares after they got home from the event. We still have the film/video from the investigation and we need to convert it to digital and post parts of it on our You Tube channel. The shell of the building that is left needs to have a heavy duty spiritual cleansing. There are countless numbers of aboriginal spirits, a young female spirit from the Psych ward waiting for her parents to pick her up (asking for her parents and scratching up her arms), and other sad entities who need to cross over. It was an amazing investigation.

The Charles Camsell Hospital was originally built in 1913 in Edmonton, Alberta in the Inglewood area. It was a Jesuit College until 1942 when the American Army took it over. They added a number of buildings on the property and the facility was used for personnel and engineers constructing the Alaska Highway.

The American Army left in 1944 when the highway was finished. The Government of Canada then took it over and RCA Medical Corps used it for a military hospital. Eventually the hospital was turned into a tuberculosis hospital (1946) and aboriginals were forced from their lands (First Nations groups in Alberta, Yukon and Northwest Territories) in to the hospital. Some with tragic circumstances. (The hospital was named after Dr. Charles Camsell, one-time geologist and Deputy Minister of Mines and Resources from 1920 to 1946).

All the death, pain, despair, hurt, sickness and loneliness started to leach out of the walls and into the halls of the hospital.

*NOTE: Please do not attempt to go into the current Charles Camsell hospital. #1, you are trespassing if you do; #2, floors are missing, and glass, barbed wire and asbestos are around; and #3, some very scary and creepy spirits are just waiting for people to come in so they can try and attach themselves to you.